Naval tradition blends with nobility. An “all season” destination, with history, tradition and architectural interest, a first class starting point for nearby, interesting excursions.

Stately, pleasant and well preserved, Galaxidi always emits a special charm to visitors, all seasons of the year. The houses of Galaxidi are simple, with four-sided clay tile roofs, typical architectural samples of the regional style. Their interior is richly decorated with carved antique furniture, elaborate silver utensils and hand-made textiles brought from the European ports. Galaxidi lies 210 kilometres from Athens, through Delphi.

The ancient Chaleion, built in the 5th century BC in the place of the current coastal town, was the first organized port in the region and was protected by strong walls. In the port of Hirolakkas, sections of the wall of ancient Chaleion are apparent in the foundation of many captain’s houses.

Already from the 18th century Galaxidi starts to develop its maritime activity taking advantage of its privileged geographical position. In the Revolution of Greeks against Turks in 1821, Galaxidi was burnt by the Turks, but recovered again after the liberation.  In the middle of the 19th century, ship owners of Galaxidi already had their offices in the ports of Europe while 350 ships comprised their commercial fleet. During the Industrial Revolution however, metal and steam boilers replaced sails and woods. Thus in the beginning of the 20th century, most sailboats were put out of commission, and the naval Galaxidi fell into obscurity.

From the road Oianthi Coast (on the deck) walk up to Mouseiou Street, take the stone paved road of K. Satha. The magnificent church of Saint Nikolaos dominates the scene, visible from all points of the village as well as from the sea. Close by the Church of Saint Paraskevi (17th century) is found, with a solar clock etched on its floor. After you cross the white-washed neighbourhoods, continue your stroll to the second port, Hirolakas, following the coastal road. Walk to the old shipyard and enjoy the panoramic view of the village against the blue backdrop of the Corinthian bay, sprinkled with small islets.

Uphill road starting at the port will take you to Sotiros Monasteri (13 th century) after 5 kilomteres, at a height of 300 meters with a magnificent view of the Corinthian bay and Mount Parnassos.

The Naval and Historical museum ( housed in an 1870s building) is the first of its kind in Greece. Most of the exhibits are heirlooms of the local seafarers’ families.  The “Naval Gallery” unit, with paintings of various type of sailboats of the time is quite interesting. The archaeological collection with finds mostly from ancient Chaleion is also important (tel. +30 22650 41558). The Folklore Museum is housed in the captain’s house of the Aggelis family    (tel. +30  22650 41910).

Next to the port, you will find the small beach of the Yacht Club. Very popular is the nearby pebble beach of Kentri. To the south-east, hidden in the embrace of a lee-way cover, you will find Anemokampi, with small pebbles and sand. On the road to Erateini, before the village of Agioi Pantes, taking a short detour(1,5 km) you will approach the secluded beach of Agios Vasileios, with fine pebbles, and deep blue waters.

Discover the real Greece with the experts 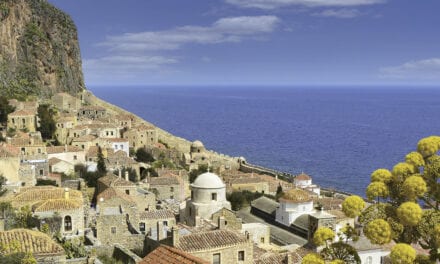