Either you choose the cosmopolitan spots, or more “solitary” ones, swimming in the wide open sea or in your own private pool, drinking ouzo on the dock, or an ice cold beer on the beach…and if you are a fun of sailing? So much the better! The tiny islands of Paxi are your paradise on earth!

The cluster of small islands floating right in the middle of the Ionian Sea, just 8 nautical miles south of Corfu, was once the “secret paradise” for the lovers of peace and quiet. Nowadays Paxi are inundated with hundreds of yachts during summer months. Nevertheless, the islands remain an idyllic destination, with crystal clear azure waters, dense olive groves, cypress trees and picturesque villages.

A story to tell

According to Greek mythology, the Paxi islands were created when the sea god Poseidon, wishing to create a refuge where he could luxuriate in his love affair with the Nereid Amphitriti, struck a blow against the southern-most edge of Corfu with his trident, breaking off the tip of the island-the trident is the emblem of the Paxi islands-. The name of the main town of the island of Paxos comes from a disciple of Paul the Apostle, Gaios, who according to tradition was a teacher who lived and died here. Indeed, legend has it that his grave is to be found behind the altar of the Church of Agion Apostolon (the Holy Apostles).

A stroll around Gaios

The town of Gaios, well hidden on the narrow strip of sea which lies between the main body of the island and the nearby island of Agios Nikolaos, looks like something out of a movie set. The houses which line the length of the waterfront have kept their traditional Heptanesian architectural style. (Heptanese or Eptanisa is another name referring to the “Seven Islands” of the Ionian Sea). You can enjoy a cup of coffee in Agios Nikolaos Square and visit the Folk Museum (tel.+30  26620 32566), which is housed in a building dating back to the 1600s. On the neighboring island (make visit arrangements through  Municipal authority, tel. +30 26620 32100) you can explore the castle, which was built in 1423 by Baron Adam the Second.

The Churches of Paxi

Not one, not two… but sixty four churches are scattered over these tiny islands. We can single out the church of Agion Apostolon (the Holy Apostles) (17th century) with its frescoes influenced by western styles and techniques, as well as the twin-domed church of Ypapanti (Presentation of Christ), the only one in the Ionian islands, which can be found at Grammatikeika.

Loggos-Lakka: Seven kilometers to the north of Gaios lies the bay of Loggos with its pretty, small harbor, encircled by islanders’ houses.  From Loggos the road carries on inland. Once you reach Lakka (11 klm. From Gaios) you will have to leave your car and continue on foot.  Tavernas and shops are spaced closely together along the waterfront. Amongst them, a number of well preserved houses are beautiful examples of Heptanesian architecture.

Excursion in inland: You can visit the village of Magazia to see the Folk Museum and a very interesting Olive Museum which is housed in an old stone olive mill (tel.+30 26620 30043).

Classical Music Festival: The festival is held each year in September in the Old Schoolhouse Hall, Loggos, and is sponsored by the Municipal Authority of Paxos and the Paxos Festival Trust

En exotic scenery: Tour boats make trips to the west coast of Paxos, with its blue caves and sheer cliffs and of course, to the small island of Antipaxos and the beaches of Vrika and Voutoumi (Water taxis 26620 31444)

South of Gaios you will find the pebble beach of Plakes and just after it is Spiatza beach following the beaches of Paxos, Ballos and Agia Marina. North of the harbor the shores of Kloni, Iouli and Kamini are to be found. Further on the beach of Kaki Lagada is surrounded by rocky cliffs.

From the village of Kontoyiannatika you can reach the wide pebbled beach of Kipiadi. South to the harbour of Loggos is the fine pebbled beach at Levrechio, where there is also a seaside taverna, whilst on the western coast of Lakka bay the more crowded beaches of Harami (which is sandy), and Kanoni are situated closely together.  If you take the road to the lighthouse you will come to Planos beach which faces north, and to the east of Lakka the beautiful shores of Arkoudaki and Orkos await. 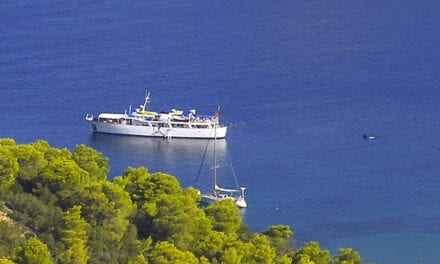 Kavala,  a city to live in!