SANTORINI – It’s one of a kind! 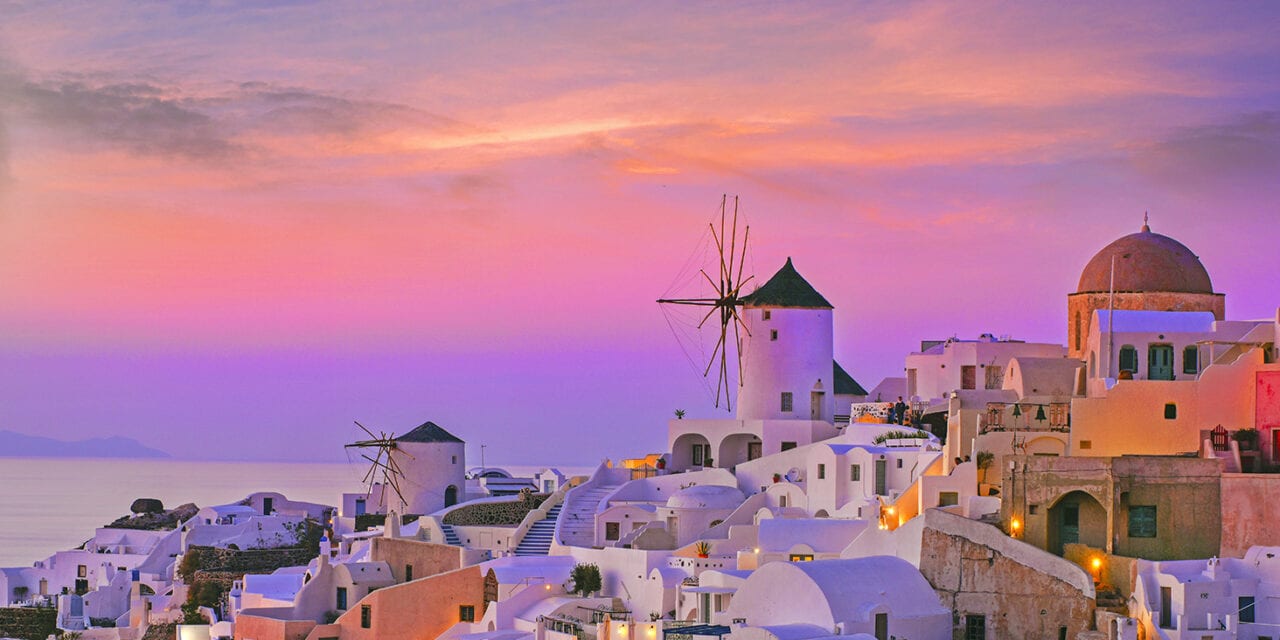 Made of black extinct lava, hewed by the forces of nature and the raging sea, this primeval island leaves even the world’s most travelled man speechless… Santorini feels like no other place on earth!

Santorini’s volcanic scenery with the relentless cliffs, the deep blue water and the multi-coloured cubical houses decorating the grey crest of the mountain, will rest within you for a lifetime.

Tourist interest is monopolized by the famous sunset, the archaeological site of Akrotiri, the medieval cobbled alleys… If you want to experience the energy of this unique place that is justly considered among the top destinations in the world, it would be best to visit before or after the peak season.

It’s been called Strongyle, Kalliste, Philitere, Thera… The island’s current name is attributed to a paraphrase, by the Franks of Santa Irena, the Church of Agia Irini (Saint Irene) where their ships used to stop for provision.

A powerful naval city was developed here in the third millennium BC, the cradle of the Cycladic civilization. Time has been favourable for this particular civilization up to the early 17th century, when a major earthquake swept away the island’s infrastructure. Then, there was the cosmogonic eruption of the volcano (1600 BC) which permanently changed the shape of the land.

The island was revived once more in the 9th century BC. Dorians founded the city of Thera which stayed prosperous up until the Hellenistic period. During the Middle Ages, Santorini was annexed to the Duchy of Naxos, whereas during the Turkish domination, it became a commercial and naval centre. In 1830, it was united with the Greek state.

Fira, the cosmopolitan capital, preserves the interesting architecture of the island. The settlement of Firostefani (1,5 km) is clearly more tranquil, while the resort Imerovigli with the luxury hotels, serves as the “terrace” to the caldera. Skaros is the location of the medieval castle. The medieval village Pyrgos is located to the south of Fira.

The scenery in the villages Exo and Mesa Gonia is very interesting, with the Byzantine Church of Panagia Episkopis (11th century) and further south to the village Emporios with the Venetian castle and the maze-like cobbled alleys.

The listed traditional settlement of Oia at the north-western tip of the island, with the hyposkapha (vaulted extensions of houses dug sideways or downwards into the surrounding pumice, residences of the less well-off) attracts most people for the magnificent sunset. The traditional small village Finikia and the old church of Agia Matrona that is built into the rock bed, are only a small distance away from Oia.

Kamari: An organised sandy beach at the eastern coast of the island.

Perissa: With amenities, protected by the wind, with fine black sand.

Monolithos: Well organised but busy, close to the airport, with black sand and shallow water.

Perivolos: To the south of Finikia with large hotel complexes, beach facilities and beach bar.

Vlychada: At the southernmost tip of the island, protected by northern winds(meltemi), the beach resembles a moonscape.

Akrotiti: Small pebbled beach with taverns and rooms to let.

Kokkini(Red) beach: A captivating scenery with red rocks and sand, close to the archaeological site of Akrotiri.

Akrotiri: Impressive archaeological site to the south-west of Fira (14 km). Excavations have revealed sections of an advanced settlement (3000 BC) that was buried under lava during the major eruption of the volcano (15th century BC). It is considered one of the most significant pre-historical centres of the Aegean Sea (tel.+30 22860 23019).

Neighbouring islands: You can visit Therasia by boat. It is the only small island that is inhabited. You can go to the Caldera and the islets Palia and Nea Kameni .You can feel the breath of the volcano on the hot ground and in the blue-yellowish sea.

Santorini vineyard: It covers an area of 1,500 hectares and it is considered the most ancient vineyard on the planet! The volcanic rock and the microclimate have favoured the production of wine that is unique in terms of its taste throughout the Mediterranean. Info at the Winery of the Union of Wine Producers Associations, tel. +30 22860 22596.

www.viewsofgreece.com Discover the real Greece with the experts…