Colours, sounds and flavours of the sea mingle here, on the largest Cycladic island. Naxos is a generous land, with indelibly recorded memories, emerging out of the primordial depths of the Aegean.

You’ ll become an enthusiast upon first glance of the medieval Chora, the port and the temple of Apollo. But when you take a closer look at landscape, you will realize that the great Naxos of endless beaches and intricate mountainous relief, will not unveil itself easily.

The island played an important role in the evolution of Cycladic civilization (4000 to 1200 BC). Its marble was used as a construction material of monumental sculptures for the sacred island of Delos. According to Greek mythology, Naxos is where Theseus abandoned Ariadne the daughter of Minos who was king of Crete. She stayed in the island and married god Dionysus; this was the beginning of her worship as a deity by the islanders.

Naxos was a member of the Athenian League. In 41 BC it was conquered by Romans and after 1204 AD passed into the hands of the Venetians and the Sanudi family, rulers of the “Ducat of the Aegean”. In 1579 Naxos was conquered by the Ottomans and in 1830 it was finally incorporated into the newly-established Greek state.

From “Portara”, the gate of the incomplete temple of Apollo (6th ct. BC), you will have the best view of Chora. It’ s easy to ascend the narrow cobbled alley-ways of the old town up to the medieval castle of Naxos. Built in 1207 AD during the Venetian rule under Marco Sanudo, it is essentially formed by the exterior walls of houses, to accommodate their colonial minority.

Looking upon the complex of the medieval buildings we single out the church of Panagia Vlaherniotissa, -its icons made by painter Agelos Kritos, a pupil of El Greco-, the church of Zoodohos Pigi, known as the cathedral of the Orthodox Christians, the building of the Ursulines and Capella Cazanta, the cathedral of the Catholic Christians. Just outside the settlement you will visit the picturesque Chapel Theologaki tightly wedged on the rock.

Byzantine Collection: Displayed in a building that belonged to the Venetian Crispi family

Agia Anna – Plaka: Take the south coastal road towards the frequented Agios Prokopios, with the sandy beach. The asphalted road then follows the relief of Agia Anna coast, with a large number of hotels, taverns, bars and camping sites crowding along its length. The route ends at the exceptional Plaka beach.

North of Chora: At the crossroad on the road to Apollonas, head towards Pahia Ammos, and then to the sandy beach of Amyti. Further north you will find the isolated pebbled Abram beach, and directly after that the medieval tower of Agia.

Apollonas (45 km far from Naxos city) is a resort with fine beaches, several hotels and restaurants. It is worth ascending to the ancient quarry to see the unfinished ancient kouros statue.

From Chora you will head to the inland villages of Galanado to see the temple of Dionysus and the castle of Belonia. The Bazaios Tower in Sagri (1671 AD) is used for hosting important cultural events (www.bazeostower.gr).

South of Ano Sagri lies the archaeological site of the Sanctuary of Demeter. There are many Byzantine churches around the wider area, such as Panagia Drosiani (6th ct). Filoti, built on a 400 meter altitude on the sides of Mountain Zas (18 km from Chora), is the island’s largest mountainous village. After a pleasant route, you will find yourselves at Apeiranthos, the most traditional village of Naxos, with many small but interesting museums www.apeiranthos.gr

Plaka, Orkos and Mikri Vigla beaches having their own microclimate which frequently results in windy days, are mostly attracted by windsurfing enthusiasts. There are training schools and stores where you can find rental gear. 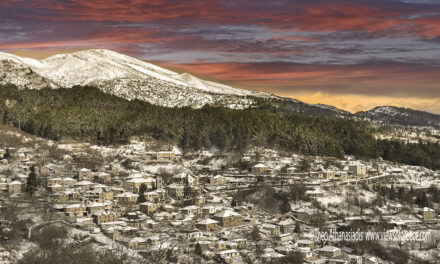