Seek out moments of relaxation on the cobbled pathways of this historical village of Peloponnese that lies in the shadow of the Arcadian mountains, or a bit of adventure in the area’s dark gorges, raging rivers and dense forests.

First impressions: Enjoy a wonderful drive (120 km far from Athens) through Vytina’s pine forests and head towards the river Lousios. Suddenly as you turn the corner the traditional village of Dimitsana comes into view with its stone, tower-like houses covering the slopes of two hills that sit opposite to each other. Its architecture is bound to excite you.

History at a glance: The village occupies a site which in Homeric times was home to the ancient city of Teuthis. During the period of Turkish rule Dimitsana village was a major intellectual centre and flourished from the mid-18th century to the start of the 19th century. Most of the impressive buildings which are preserved today were built at that time. Here lies the School of Greek Letters, where leading figures who played a key role in the historical developments of the National liberation struggle attended their studies, including Bishop Germanos of Patras and the Patriarch Gregory V.  The heart of a nation in uprising beat in Dimitsana. The water mills were converted to gunpowder mills, supplying powder for the rifles used in the revolution(1821).

Walks in the village: See the old fortress-style Antonopoulos, Kazakos and Xenios mansions in Dimitsana as well as other historical buildings. Many old churches such as Vlachopanagia, Metamorfoses and Agios Georgios Church fully covered in old frescoes and the stone clock tower are also worthy of note. Don’t forget to visit the Public Library at Dimitsana School which houses rare manuscripts from the 1821 Revolution (27950 31219). The residence of Bishop Germanos of Patras is now an ecclesiastical museum (27950 31217), while the home of Patriarch Gregory V is open to the public.

River Lousios: The River Lousios flows from the Maenalos plateau and until it joins the Alfeios River, it forms one of the most beautiful gorges of the Arcadian land. The name Lousios derives from mythology. In Greek the verb to bathe is louzo and the god Zeus, master of Olympus, is said to have bathed in the river’s clear waters. Around 100 water mills / gunpowder mills, water-powered wool-carders, water saws and water presses operated along the banks of the Lousios in pre-industrial Greece.

Open Air Water-Power Museum:  It is located a little outside of Dimitsana in a charming location with plane trees and running waters. This is an exceptionally interesting museum where visitors can see how a full water-powered small industry from that period operated and also how gunpowder was prepared. Watch the actual process or see how it was done using multimedia, +30 27950 31630 www.piop.gr.

Moni Filosofou Monastery: The Nea Moni Filosofou Monastery (18th century), built at an altitude of 600 m overlooks the Lousios Gorge. The old abandoned monastery founded by the secretary to the Byzantine Emperor Nicephorus Focas (10th century), was important because it served as a “Kryfo scholio”(meaning a Secret School), – the term refers to supposedly illegal underground schools for teaching the Greek language provided by the Greek Orthodox Church during Turkish rule between the 15th and 19th centuries-. There was also a famous seminary there. The monastery is impressively built in rocky caves on the craggy sides of the gorge. It can be accessed via a short but steep path (+30 27950 81447).

Prodromos Monastery: Heading from Dimitsana to Stemnitsa, lies Prodromos Monastery(12th century), accessible from the road that heads towards the gorge. It nests into a cavern on the precipitous rock face. The Katholikon (major temple) has frescos dated from the 16th century made by icon painters of the “Cretan School” (27950 81385). Lousios Gorge was full of sketes (hermitages) of monks which united to form communities and monasteries used as refuges by the rebels of Greek Revolution against Turks.

Ancient Gortys: The ruins of ancient Gortys have been excavated along the shores of the River Lousios in its shady gorge. It was an important ancient spa city where the god Asclepius was worshipped. Archaeologists have brought to light sections of the fortifications, a peripteral temple, public buildings, bath houses and the temple of Asclepius (4th century BC). Entrance in the archaeological site is free of charge.

Hiking pathways: An amazing pathway starts from the Nea Moni Filosofou Monastery along the Lousios Gorge which ends at Prodromou Monastery on the other side of the canyon.

Rafting in Lousios: The River Lousios is navigable near the village of Karytaina. Boats enter the river under the single-span stone bridge of Atsicholos and white waters excitement ends at Koukou Bridge 90 minutes later (www.trekking.gr, www.ecoaction.gr, www.alpinclub.gr). 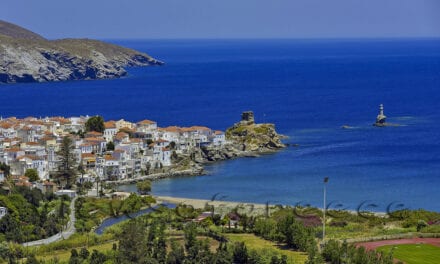